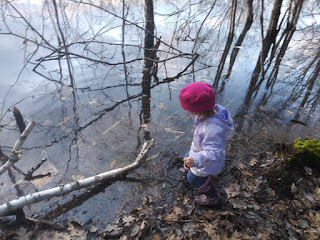 So I’ve just lived through a nightmare.  And I don’t want to just forget about it and move on.

We were around the table at Grammy’s after supper last night and Grammy and Clarity had gone back outside after coming in for some warmer things.  It was getting cold, would be dark soon, and I didn’t think they’d be out much longer.  Time passed, we ate some ice cream and talked, and then Ryan looked out and didn’t see them.  I don’t remember exactly what prompted me to go out to find them, as I don’t think I was worried, but then I walked all around the house, looked up the roads (3 meet just by the house) and into the woods and found nothing.  That’s when I started to worry.  This wasn’t normal.  And that thought started getting louder.  Grammy is older, doesn’t walk often, and especially on cold nights with 2-year-old great-grandchildren.  She just wouldn’t walk up the road, and even if she did, not out of sight.  It didn’t make sense for her to go into the woods. She just doesn’t.  Ticks, concerns about falling or tripping on something when you’re her age are very real things.  But her falling and being hurt somewhere in the woods where we could somehow neither see nor hear her was starting to feel like the best possible scenario, as logical possibilities of what could have happened grew fewer.

We all started looking.  Josh on bike one way, Aunt Wendy on foot another, Ryan, Cyrus, and I by truck another.  Cyrus was the only one finding anything funny as we bounced potholes.  Nothing.  It was awful.  I was trying not to freak out.  Breathe.  The neighbors had seen nothing.  Neither had the guy walking his dog. I started texting, calling people, asking for prayer.  The lady down the road hadn’t seen anything.  It was time for 911.  Telling them what Grammy and Clarity were last seen wearing was awful. I think I was past thinking, “this can’t be happening to me!”  Bad things do happen to me and mine, I discovered in 2006, and now it was more like, “this is what it feels like.”  Beating in my head was to trust God, and I kept trying to push my trust back to Him, crying out to Him, mostly in my head, trying to breathe.  That was how I stayed remotely together.  But I was into trying to comprehend how to live in the future, and how to trust God with that? A horrible future. It was awful. Trusting God was survival. He doesn’t leave me, I leave Him, and that is where life isn’t worth living.

I was back at the house.  What could I do?  I wanted to do something.  I had called Pastor, texted family, texted 2 friends in the U.S. (my general time zone) to pray.  I didn’t want to tell my Mom yet. Why ruin her night if life was going to be awful ahead.  The police were there now, dogs were coming.  I felt so sick.  That seemed hopeless.  It didn’t make sense for them to be off in the woods, and it was almost night.  What did make sense was about my worse nightmare, and I’m not writing it here.  Cyrus, jolly throughout (except for that moment where I was out knocking on another neighbor’s door and Ryan plunked him in Uncle Rick’s lap while he went off to search in his truck again, and Cyrus howled for about 10 minutes until Uncle Rick gave him a finger to have and to hold, and maybe chew :)), needed to eat. At 8:14 my friend gets my messages and writes back she’s praying, at 8:15 I text, "My trust is in God.  But I’m scared.”  We’d been looking since around 7:30.

And then, what to me was unbelievable.  Pastor called.  They were with him.  He was on the road and they were with him.  I think I got off before I let go to violent crying, weak with relief.  What a reunion.  So many kind neighbors, so many wonderful police, so many dear family members, hugs, explanations, so much relief, so much gratefulness, laughter, tears.  I got to hug and hold my little girl tight again.  And then we were all back in the warm house talking, the loudest and best visit since quarantine started, sitting on the floor or on dining room chairs, everybody sharing their little piece of the awful story with such a happy ending.  It was like a scene from a movie, but better. 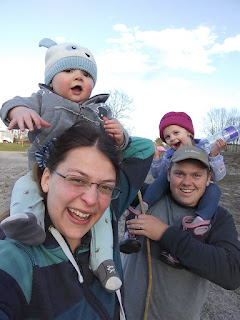 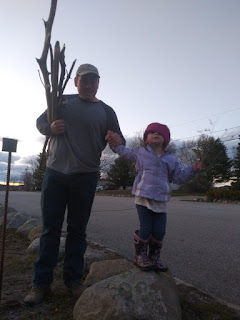 What happened was this: they had gone out into the woods and Clarity had wanted to climb rocks, and walk logs.  Ryan, Clarity and I (carrying Cyrus) had gone adventuring Mother’s Day to find the perfect stick for a macrame, and Clarity wanted to go on an adventure.  It’s been so long since she and Grammy have had much quality time, that Grammy was probably more absorbed than usual.  They didn’t mean to go far, and the house had been just in sight, but suddenly it wasn’t.  Grammy thought that they should go back, and tried, but must have got turned around.  She said it was like in a book, only that had never happened to her!  She thought she’d found the stream that runs behind the house, but it turned out to be a different one.  She was worried, and feeling terrible at how we must be worried, but not sure how to get back to us.  They called, Grammy trying to be cheerful so Clarity wouldn’t get scared, and kept walking.  They sang and talked and thought they’d found something - but it turned out to be a doorless shack off somewhere in the woods.  Clarity, getting tired, asked if they could sit down, but Grammy pointed out it was getting dark, so they kept on going, though Clarity especially was getting slower.  I was so grateful after for the warm coats they’d come back in to get.  They encountered a stone wall, and Grammy thought following it would lead to a road.  Finally they spotted a house, but Clarity proclaimed it was not ours.  And it wasn’t.  It was rather far up the road from “ours,” but it was a house on the road, and that was cause for relief.  Meanwhile, our dear, former-EMT Pastor was searching the sides of the road by flashlight for signs of a struggle, when they finally found each other, just before the dogs would have.  That’s when he called.

When things were finally winding down, on my way to my car to finally drive home - safe, with my little girl ok in the backseat, buckled into the carseat we’d pulled out earlier as the best things for the search and rescue dogs to track her scent with - I remembered this verse.  It’s in a chapter about the scrapes, the awful situations, the terrifying circumstances people get into, how God rescues them, and then they forget, and like the chorus to a song this verse keeps being repeated in Psalm 107.
Oh that men would praise the Lord for His goodness, and for His wonderful works to the children of men!
Psalm 107:31

So that’s what I’m doing.  Praise God!  Clarity is a gift.

This picture sums up what I’m most thankful to God for tonight. (Well, last night now) 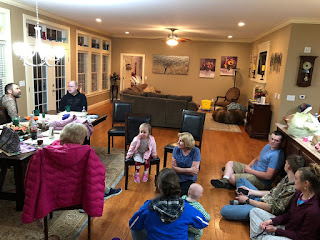 Popular posts from this blog

March 10, 2016
In preparation for St. Patrick's day - which is just 1 week away!  I had fun with this one. :) The original picture is by Ginger Kelly and you can find it here: http://www.publicdomainpictures.net/view-image.php?image=68881&picture=green-tree-frog.
Post a Comment
Read more